What is hard water?

As rain water passes through soil and rock it dissolves traces of minerals, such as calcium and magnesium. “Hard Water” is simply water with a high content of these minerals.

Overall the UK’s drinking water is classified as “very hard”, with many areas of England exhibiting over 200mg of calcium carbonate per litre. Around 60% of UK households are in a hard water area. 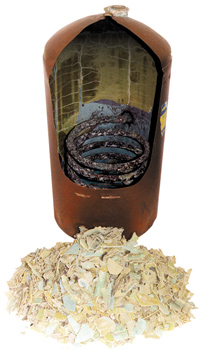 Hard water causes problems by leaving behind a build up of minerals over time, mainly calcium. Around the home this can be seen as scale forming on the edge of basins and toilets, in showers and on taps. As well as making kitchen and bathroom fittings look and feel grubby, and become a real nuisance to clean, this build up inside the plumbing can lead to a very real problem with maintenance and energy costs.

Just 1mm of limescale in your hot water system can increase your energy use by 7%, costing the average household an additional £150-£200 per year. Find out more about the costs of hard water here.

I am pleased to say it appears to be working satisfactorily. Within a few weeks of installation the showerhead was free of scale, and it is now much easier to clean the shower base and round taps in the basin. I will certainly recommend to anyone who might be interested .

You’ll also see the effects of hard water in domestic appliances, including dishwashers, washing machines and kettles. Limescale deposits increase when water is heated, making appliances perform less efficiently and reducing their lifespan. Hard water also has an effect on soap, reducing the formation of lather.

Although the calcium in hard water is in itself good for your health, some studies have shown hard water can also aggravate dry skin conditions and Eczema.