Limescale is caused by soluble calcium bicarbonate converting to insoluble calcium carbonate. In simpler terms, it’s the chalky substance that forms in crusts around taps or creates a white film on your shower screen. Limescale occurs in places where water is either heated or left standing.

Hard water, which is water that contains a higher mineral content, is the root cause of limescale. When it evaporates from a surface, it leaves behind calcium and magnesium deposits.

If you live in a hard water area you will have more issues with limescale build up than if you were living in a soft water area.

Where does limescale form?

You will see limescale in obvious places around your home and may spend some time cleaning and removing it on a regular basis. The places you may notice it are:

However, limescale also builds up in areas of the home that you cannot see.

The problem with limescale

A family of four can create up to 70 kilograms of limescale each year, just by using water in the usual way that we all do. This is the weight of an average adult, so it’s easy to see how this volume of any solid substance likelimescale, added to your heating system each year, could lead to problems quite quickly.

The three main problems with limescale build up are:

This is just a few examples of the issues that limescale can cause. find out more about the costs of limescale buildup in your home

How does Scaleguard treat limescale?

Scaleguard is a cost effective solution to protect your home against the most expensive damage caused by limescale build up.

Scaleguard removes hard limescalebuild ups from your pipes and boiler

You may notice that in your bathroom, hard limescale builds up on your taps whereas a soft, cloudy residue develops on your shower screen. These are two different types of limescale.

Scaleguard will tackle the build ups of hard limescale, which cause the big issues like increased energy bills and increased repair and replacement costs for appliances

Scaleguard works on unseen areas where limescaledeposits cause the biggest issues

Scaleguard does not remove minerals from the water, meaning it remains hard, but it prevents those minerals from depositing in areas through which water flows such as your boiler and pipework. If those minerals don’t stick to surfaces, they cannot build up and cause limescale.

Find out more about the benefits of Scaleguard here

Where water is left to evaporate or stand, like in your kettle or around your taps, you may still see some limescale. Whilst this may mean you still need to clean visible limescale, you can be assured that Scaleguard works on the real issues caused by unseen limescale.

How do I remove limescale?

Limescale can be tough and using abrasive scourers to remove it can damage the surfaces below, like enamel bathtubs and chrome taps. To avoid this you can buy mild acids, which will dissolve the limescalewithin minutes, without any need for elbow grease and without causing damage to your taps.

A whole range of these acids can be found at your local supermarket. Be sure to follow the instructions carefully and check that it is suitable to use on surfaces you plan to use it on.

If you would rather use natural substances in your home, perhaps if you have allergies or pets and children that you want to keep out of harms way, you can opt to use vinegar, which contains acetic acid or lemon juice. Pickling vinegar and lime juicecontain even stronger acids and can be used on particularly stubborn limescale deposits.

Here’s how to use them:

The best way to keep your bathroom and kitchen shining is to keep on top of limescale, cleaning regularly to keep it from building up into hard-to-remove plaques. 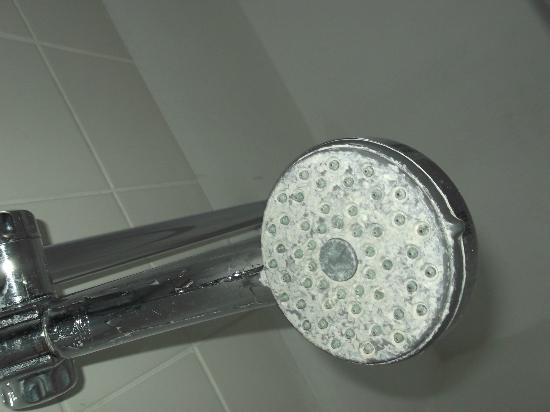